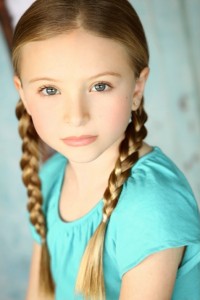 Emily Rosenfeld is a young actor, singer and dancer based in Westchester, New York. She is currently appearing as MOLLY in the Broadway, TONY nominated revival production of Annie The Musical, directed by James Lapine at the Palace Theatre.

Emily got her start in Random Farms Kids’ Theater productions, where she had the opportunity to play: GRETL in The Sound of Music, BIG JULE in Guys & Dolls, DICKON SOWERBY in The Secret Garden and MICHAEL DARLING in Peter Pan, among others.

Live Performances: Emily sings with The Broadway Youth Ensemble (BYE), a select group of professional children who perform in and around New York City. With this group, she sang backup for the band TRAIN on NBC’s New Year’s Eve with Carson Daly. Other BYE performances include: I Hate Music with Emmy Award Winner Glen Roven at the Urban Stages Theater and the Vets Rock Concert with Country Singer Lisa Matassa, held at the Brookhaven Amphitheatre.

Recordings: ANNIE The Musical – Broadway Revival Cast Album, When I Grow Up: Broadway’s Next Generation.

Emily has also performed in commercials, industrials and voiceovers.